Welcome to another Cupcake Saturday! The week seems to go by pretty fast, and before you know it, it’s Saturday again. I guess it’s a good thing we have a ton of recipes to try… Before we get to that, here is a picture of tonight’s dinner- spaghetti and meatballs! Robyn made the meatballs and they look delicious! 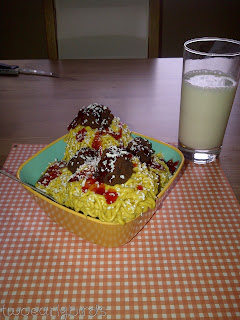 April Fool’s!! (Har-har…hilarious, I know…) It’s actually a cupcake! Well, 4, but still... It’s a chocolate cupcake with vanilla frosting, piped to look like spaghetti. The meatballs come from a crumbled cupcake. No pasta dish is complete without sauce, which is just a little bit of strawberry jam. And, in our opinion, the cheese makes the meal, which is just some grated white chocolate! Talk about carbo-loading! Have a great day and don’t play too many tricks tomorrow!!
Posted by Two Early Birds at 8:00 AM 1 comment:

It’s a rainy day here. I know what you’re all thinking, “Of course it is. It’s Washington.” And I’d have to agree, but it hasn’t been this bad yet. We had a week of gorgeous weather- we were able to see Mount Rainier and the Cascades all week! It was pretty windy last night and this morning. It’s supposed to clear up a little later, so we’ll see. Anyway, here is another home décor project Robyn worked on. It’s her bathroom. It started off with just the shower curtain and blue sink accessories. The shower curtain is just a $5.00 bed sheet with holes punched on the top for the rings. (Thanks Mom, for that tip!) Imagine how easy it will be to update later on! Anyway, to match the polka dots on the curtain, Robyn added some dots to everything else in the bathroom. She cut circles out of different blue vinyl. The mirror by itself is less than desirable, so the dots add a nice touch! Her towels are blue, too, well, will be! 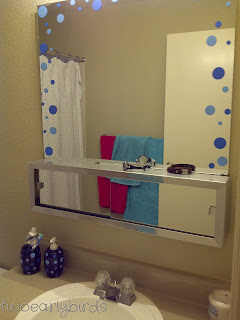 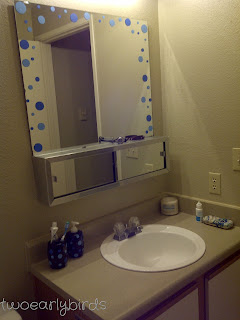 It has been two weeks since we moved into our little apartment. It’s still pretty bare, but we are slowly adding our own personal touches to it. The first picture is of our living room. Not much in here, but that’s our “couch” off to the left. And our coffee tables provide excellent storage space and “office”! The collage adds some color to the wall. 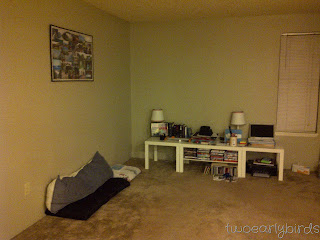 These next two pictures are of our dining area. The wall art was posted a few days ago. Still looking for suggestions on embellishing it! Anyway, Robyn was being crafty in here. She made the table runner, along with the white slipcovers for the chairs. They’re pretty neat because she made them so the bows can be changed, depending on the season. Now she only has to make matching table runners for all the other seasons! The other is another view, with our mantel and fireplace. And the first piece of fine art we hung up! Sarah made it for us and we love it! It’s such a cute piece! We love the button projects ;) And, we can see another view of Robyn’s sewing projects. 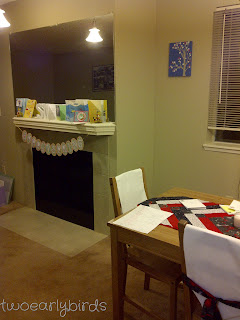 We have taken a few pictures of the kitchen, but it needs some art work. It’s not complete yet, so we’ll post those once we add our own touch to it! And once the other rooms start coming together, we’ll post those, too!
Posted by Two Early Birds at 8:00 AM No comments:

Back to Card Making!

We’ve made a few cards since getting here, but it seems to be getting back to “normal” (Not sure if that makes sense…) Anyway, we were looking in some of our magazines and I came across a scrapbook page that had something like this on it, and I really liked it. The colors and flower helped. I wanted to make a card based off of it and this is what I came up with: 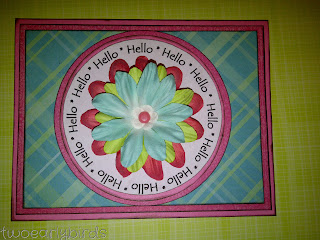 The page had some journaling around the flower, so I changed it to say “Hello”. The hardest part was getting the computer to cooperate with me. After many tries, the flower finally fit in the center. I inked around the edges of the pieces, too. It’s a nice way to differentiate between all of the layers. The inside of the card was left blank, so it’s more of a note card. I love how bright and cheery it is!
Posted by Two Early Birds at 8:00 AM No comments:

Our Own Wall Art

Here is the first piece of art we made for the apartment. It’s just a quickie project, but it adds a lot to an otherwise bare wall. We made it ourselves, so it was a lot less expensive than the ones you buy at the store. It says, “Sit Long, Talk Much, Laugh Often”, all of which we do more than enough of!! And since we made it, we can personalize it. The only thing we’re not sure about is how to add to it. We think it needs something more, but we can’t figure out what it should be. We’re up for any suggestions! 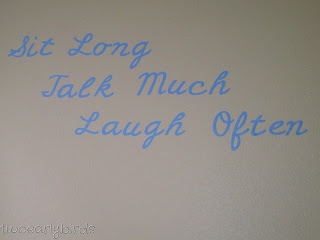 So, the weekend has come again and it’s time for another Cupcake Saturday. We were looking in our cabinets to see what we had already. There wasn’t much. Except peanut butter and chocolate! In our opinion, you can’t get much better than that! We decided on a chocolate cupcake, filled with a peanut butter mousse and peanut butter frosting. We also added a hard chocolate shell around the edges. Oh my goodness!! Probably the tastiest cupcakes we’ve made in a while!! They were so good! Now, one might think, “That’s a lot of peanut butter,” but is there really such a thing?! And they weren’t overpoweringly sweet either. Much more neighbor-friendly than last week’s green velvet…unless they’re all gone by the time you go to put them in a box…
We could only get a picture of the entire cupcake. The inside was gushing with peanut butter and just a little unphotogenic!! 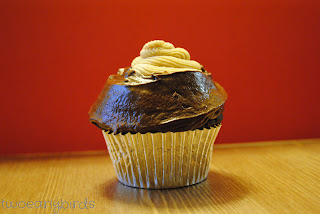 Don’t you wish you could just eat the computer?! Too bad they’re all gone…

So, we're aware that we are a day early, but with the weather we've been having out here, it feels like what Spring should be! And, since we haven't had any snow this winter, it feels like it should have happened months ago. Granted, it probably feels more like summer now, at home. Anyway, in honor of the changing season, we made a banner to hang from our mantel. It adds a little brightness and cheer to, the otherwise bare, living room. Actually, the mantel is probably the cheeriest spot in the apartment so far! It's a little hard to see in the picture- the glare off the mirror doesn't help much. It says "Happy Spring". The second picture is of the spacer. 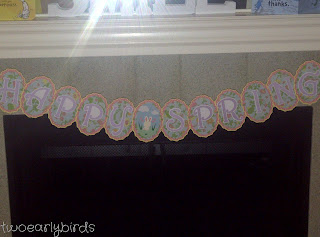 This is the space between the two words. The little bunny was just too cute not to use! He, along with the letters, are 3D and pop out of the banner. Doesn't he look like he just belongs among the flowers?! And it may be a cloudy day, but there's no rain! 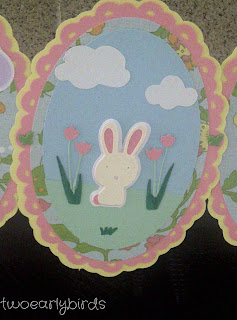 I know that  it looks more like an Easter banner, but that way it will be easier to change in a few weeks! Hope everyone has a great day and thanks for looking!
Posted by Two Early Birds at 5:32 PM No comments:

A Change of Address Card

As our small group of blog followers know, we just moved across the country. Well, that calls for a change of address card, of course! They're in the mail, as soon as we find the nearest Post Office. Looks like we'll have to make some new mailman friends out here... just not the same, though...
Here's a look at it: 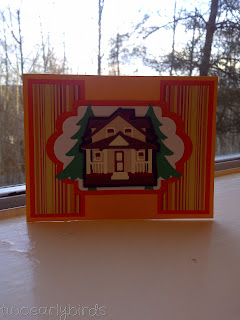 And contrary to what you all might think, the sun DOES come out here!! If you look in the background, you can see blue skies AND some sun coming in to the left of the picture.  We were able to see Mt. Rainier in the distance today, which means it wasn't cloudy! Last summer when we were here, we drove up to the mountain and couldn't see it. Just wait till the summer when it's 95 at home and nice and comfortable here!!
Posted by Two Early Birds at 5:00 AM No comments:

Hey there. It's been a while. I think we missed 2 weekends of Cupcake Saturday, and boy am I bummed about it. However, no time like the present to start again! So in honor of St. Patrick's Day today, we had to search through all of our things to find the baking sheets, but we did!! We made some Green Velvet Cupcakes with an Irish Cream Cheese frosting. The picture looks really dark, but they really are green. Our chocolate to food coloring ratio was a little off. Too much chocolate (is there such a thing?!) and not quite enough food coloring. Oh well. They still taste delicious! We need to stop making so many, or run a whole lot more... Forgot that there isn't anyone else to share them with. I don't know if green food coloring overloaded cupcakes will go over so well with the neighbors. We'll have to freeze them and make them last a while, until next Saturday. We'll have to make some neighbor-friendly "normal" cupcakes. Start off slow so they aren't weirded out! :) 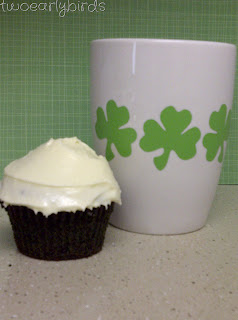 (One thing about not being at home, there aren't as many decor pieces to use for props...)
Posted by Two Early Birds at 7:00 PM No comments:

An Update of Our Adventures 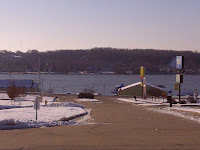 This is the view from our hotel looking out over the Mississippi River in Iowa. 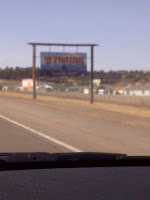 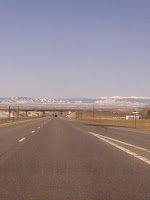 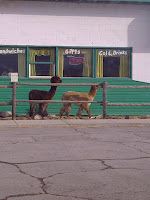 Alpacas at the gas station in the "Middle of Nowhere" 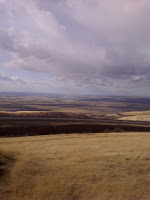 The Astoria-Megler Bridge, spanning the Columbia River and connecting Oregon to Washington 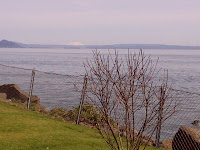 The view from the Washington rest stop, across the bridge. That little white mound is Mt. St. Helen's, and if you look real close, Mt. Rainier is behind it.

Our cars, happy to finally be in Washington! Now, they just need a bath...
Hopefully, we'll be all settled and back to our crafts and cupcakes!
Posted by Two Early Birds at 7:50 PM No comments: 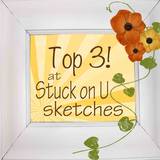